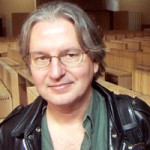 Bruce Sterling is a leading science fiction writer, one of the founders of cyberpunk and the unofficial spokesperson for the genre. He is the creator of Dead Media project, an online archive to forgotten, or dead, media technologies.

Another project of his is the Viridian Design Movement, an environmental movement founded on the ideas of global citizenship, environmental design and techno-progressiveness. Bruce was severely criticized due to the fact that this movement rejects the idea of returning to the nature as the only way of saving the environment.

Sterling’s most acclaimed book, The Hacker Crackdown: Law and Order on the Electronic Frontier (1993), can be treated as a history guide through cyberpunk, following the periphery of the development of technology from the first telephone hackers to the government’s attack on several prominent hackers in 1990. Bruce Sterling has blogged extensively in the blog Beyond the Beyond published by Wired Magazine and has written many articles. Together with William Gibson, he co-authored the novel The Difference Engine.

It’s interesting to mention that he spent several years in Serbia with his second wife, the famous director, Jasmina Tesanović. He gave lectures at the universities in Switzerland and California. Hugo i The Electronic Frontier Foundation are probably his most valuable awards.